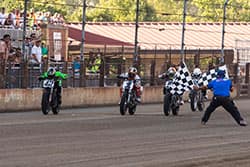 “Today I just put my head down on my Harley-Davidson XR750 and gave it all I had,” said Mees who pilots the Rogers Racing Las Vegas H-D/Blue Springs H-D Harley-Davidson® XR750 motorcycle. “We’ve got the points lead and I feel like we’ve been dominant on the half-mile tracks this season, so we’re in a great position for these next two races.”

Jake Johnson finished third at Springfield on the Harley-Davidson® Screamin’ Eagle® Factory Team XR750 motorcycle. Johnson, Mees, Smith and Halbert made up a lead pack that swapped the first position for much of the 25-lap main. Coolbeth, aboard the Zanotti Racing Harley-Davidson® XR750 motorcycle, caught the leaders in the closing laps after charging up from a back-row starting position. Johnson passed Mees and Smith to take his first lead of the afternoon as the trio charged through the final two turns of the historic Springfield oval, but Smith used the draft provided by Johnson and Mees to slingshot into the lead and win by just 0.026 seconds. Mees nipped Johnson by 0.001 seconds.

“The Factory Harley team worked hard for me and put me on a fast motorcycle today,” said Johnson, a two-time Grand National champion in his second appearance as a replacement rider for injured Harley Factory Team rider Brad Baker. “Running up front and putting the Factory Harley on the Springfield podium is great validation for me. I know I can still race these bikes.”

The Harley-Davidson Wrecking Crew riders return to the track Sept. 19 for the Roar on the Shore at Delaware International Speedway in Delmar.