Krawiec Earns Top Seed and Aims for His Fourth Championship 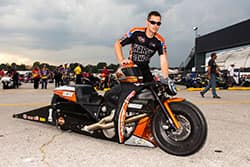 Krawiec has three wins in six final-round appearances in the first 10 races of the season and leads the Pro Stock Motorcycle class by 135 points. For the upcoming six-race Countdown, points for the Top 10 racers will reset with a 10-point interval between each, plus a 20-point bonus for Krawiec as the top seed. The Countdown playoffs begin Sept. 18 at the NHRA Carolina Nationals in Charlotte, N.C., at the zMax Dragway.

“The Screamin’ Eagle team is heading into the Countdown with a lot of confidence and two very fast Harley-Davidson V-Rod motorcycles,” said Krawiec, a three-time Pro Stock Motorcycle champion (2008, 2011 and 2012). “We know what it takes to win this championship, and that’s with consistent performance by both the rider and the motorcycle.”

Harley-Davidson® Screamin’ Eagle®/Vance & Hines rider Andrew Hines, the defending Pro Stock Motorcycle champion, is the third seed for the Countdown. Hines has one win in two final-round appearances this season.

“We are in a great position to start the Countdown,” said Hines, a four-time Pro Stock Motorcycle champion (2004-2006, 2014). “The V-Rods are running well and responding to tuning changes, and that’s only going to improve as we head into cooler weather during the Countdown.”

Hines qualified in second position at the U.S. Nationals in Indianapolis, he won in the first round of eliminations on Monday and lost in round two. Krawiec qualified eighth at Indy and also won a single round on Monday.