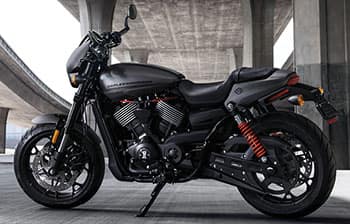 As a kid, you may have been warned about playing in the street.

If you still feel the same draw to the street as an adult, then Harley-Davidson is counting on the its new Street Rod™ to be the motorcycle for you.

Aimed at urban dwellers, the sporty and aggressive Street Rod™ is built to navigate stop-and-go traffic with racing precision while turning heads with its “raw, authentic bad-ass” styling.

“We are reaching a customer who maybe had a fondness for Harley-Davidson but may not have found the bike in our lineup to meet their needs,” said Jeff Strunk, of Harley-Davidson’s product planning department. They are “primarily a younger crowd, frequently folks living in a more urban environment, looking for a way to get around in a more exciting way.”

Several standout features ought to make that statement abundantly clear; especially to Harley-Davidson novices or those who have taken note of Harley riders on open country roads:

See the Street at Your Las Vegas Motorcycle Rental Center

That backhanded compliment is an apparent reference to the Street 750, an earlier iteration that Harley-Davidson produced in 2006-07. Street Rod™ is built on the same platform, but the similarities mostly end there. The frame and fuel tank are the only shared parts and even the tank was repositioned (farther forward) on Street Rod™ to accommodate its forward-leaned stance.

“At the heart of it was a raw, authentic bad-ass Street Rod for the city,” Savage said. “When we were doing the ideation for the model, we called it a Street on steroids.”

Visit Las Vegas Harley-Davidson to see Street Rod™ for yourself – but only if you’re eager to once again play in the street.